Top 10 trends that will transform mobile between now and 2015

He put HTML5 at the top because he stated, “By 2015, mobile Web technologies will have advanced sufficiently such that half of the applications that in 2011 would be written as native apps will be, instead, delivered as Web apps.”


The other three themes of Nick’s list are machine-to-machine (M2M, or the “Internet of things”), location-based tools, and more robust wireless connectivity. In terms of the wireless issue, here’s a chart from his presentation that maps out what’s coming, when, and how fast it is: 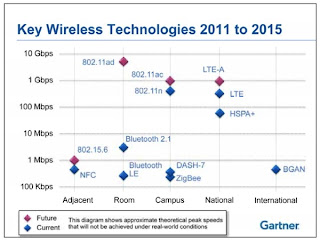 Jason Hiner’s take on this
The two big things that I think are missing from this top ten are 1.) the advent of business-centric app stores, and 2.) mobile data security technologies. Both of those trends will be driven by the consumerization of IT and the fact that more an more IT departments will embrace the concept of employees bringing their own devices into the enterprise. In order to allow that but still maintain corporate standards and data security, companies will need to give employees access to business apps that they can use on their devices and implement technologies that can protect sensitive corporate data when it’s being viewed, created, and manipulated on devices that the company does not control.”

Adelaide, South Australia
View all posts by Dr Greg Carey →
This entry was posted in Uncategorized. Bookmark the permalink.